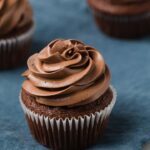 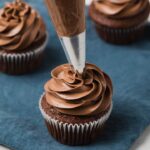 Chocolate Swiss meringue buttercream is a stable frosting that isn't overly sweet. And it's an easy chocolate meringue frosting to make.

Cooked egg whites and sugar make up the base of chocolate Swiss meringue frosting. Then butter, salt, vanilla, and chocolate are added for flavor.

The cooked egg whites and sugar are whipped into stiff glossy peaks, then the butter is slowly added. Once the butter is fully incorporated, vanilla and melted chocolate are mixed in. The result is a lusciously creamy frosting that is extra smooth, creamy, and not overly sweet.

It takes time to whip this frosting and errors can occur. But, I've outlined exactly how to achieve success and what to do if something goes wrong.

Why this Swiss buttercream recipe works:

Swiss meringue buttercream requires a handful of ingredients to make the base of the frosting. Once the base is made, you can add melted and cooled chocolate to create the silkiest chocolate buttercream of your life.

The process of making chocolate SMBC is exactly the same as if you were making basic Swiss frosting.

This means you must wash and dry the mixing bowl and beaters. Also, wipe them down with vinegar to cut any residual grease. Even the smallest amount of greasy residue will prevent the egg whites from whipping up.

Heat the egg whites, sugar, and salt in the bowl of a stand mixer set over a pot of barely simmering water. You only need about 1 inch of water in the pot and make sure the bottom of the bowl isn't touching the water.

Whisk gently but continuously as you heat the mixture to 150°F on an instant-read thermometer.

Transfer the bowl to the stand mixer and whip on medium speed until the mixture has cooled and is the consistency of shaving cream. It will be thick, glossy, and retain stiff peaks.

You'll know the meringue is cool enough when the outside bottom of the bowl isn't warm to the touch.

Once the meringue is cool, start adding the butter. Add 1 tablespoon at a time with the mixer on medium speed.

And don't add the next piece of butter until the previous one is fully mixed in.

Add the melted and cooled chocolate plus the vanilla. Mix on medium speed until fully combined.

Turn the speed up to medium-high and whip until light and fluffy. This should only take about 30 seconds.

Important tip: Don't be alarmed if the buttercream starts to look curdled once you add the butter. This is normal.

Continue to let the frosting mix until it comes back together. And don't add the chocolate until the buttercream base is smooth and creamy.

There are a few kitchen tools needed to make chocolate SMBC. While some of these items are completely optional, others are an absolute must!

Whisk: A large balloon whisk (affiliate link) is great when heating the egg whites and sugar over a double boiler.

Instant read thermometer: If you have never made Swiss meringue before, an instant-read candy thermometer (affiliate link) will be most helpful. Use it to test the temperature of the butter and the cooked egg whites.

Pot or saucepan: You'll need a medium-sized pot to set the mixing bowl over in order to cook the egg whites. You'll use the mixing bowl from your stand mixer so make sure the pot is wide enough for the bowl to sit over the top without going too far into the pot.

A lot can go wrong when making Swiss meringue buttercream or at least you might think it went wrong. But for most issues you may run in to, there are simple tricks to help get your buttercream back on track.

Meringue won't whip to stiff peaks: If your meringue (the cooked eggwhite mixture) isn't reaching stiff peaks after mixing on medium speed for 2 minutes, it's quite possible the egg whites were contaminated with traces of egg yolk or grease/oil.

You can try letting it whip for a few more minutes but if it's still not reaching stiff peaks, you'll need to start over with clean tools. It's helpful to wipe the mixing bowl, beater, whisk, and/or spatula with vinegar after they've been thoroughly washed and dried.

Curdled buttercream: It's quite normal for Swiss meringue to curdle or separate as the butter is being added. This is perfectly normal. If you added all the butter and the frosting still looks curdled, it's a good idea to walk away for 5 minutes and let it keep mixing. The majority of the time, it will come together.

If the frosting is still curdled after walking away for 5 minutes, you can still salvage it.

Thin, soupy buttercream: Thin or soupy frosting is the result of the meringue being too warm or the butter being too warm. This is easily fixable by placing the entire bowl with the whisk attachment in the refrigerator for 20 minutes. Rewhip the mixture on medium-high speed until it has thickened.

You're now well-equipped with everything you need to make chocolate Swiss meringue buttercream. You know exactly what ingredients to use and steps to take to achieve success.

Happy Baking! Or I should say, happy whipping.

Would you be willing to give some name brand options for the chocolate?

Hi Karin! I use Baker's and Ghirardelli chocolate.

I just wanted to say the hairdryer tip is absolutely genius! Thank you!

Can I reduce the amount of granulated sugar in the meringue? I’m planning to use milk chocolate which is already sweet enough.

This is something you'll have to play around with. The sugar not only sweetens the frosting but it helps stabilize the egg whites. I'm not totally sure how reducing the sugar will affect the final product.

Which brand for the bowl are you using for the bain marie?

I use the bowl that accompanies my Kitchenaid stand mixer.

Am I the only one who feels the recipe is too buttery and not sweet enough?

Am I allowed to add more sugar?

However, the instructions are spot on. This is the first time I've made a Swiss meringue buttercream and not shed a tear.

Buttery and not too sweet is exactly how Swiss meringue buttercream is supposed to be. You may prefer Italian meringue as it is similar in texture but tends to be a bit sweeter.