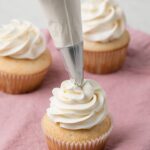 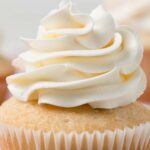 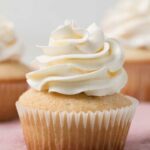 Learn how to make the silkiest Swiss meringue buttercream with this step-by-step tutorial and video. You'll never want any other type of frosting after you try this one!

Swiss buttercream is a lightly sweetened frosting made by incorporating butter into a meringue base. It's less sweet than my American vanilla buttercream but has the same light and fluffy texture.

Meringue buttercreams can be finicky, though. You must use proper technique to ensure the frosting comes together as it should. But overall it is quite simple to make.

I prefer Swiss meringue frostings over Italian or French because I find it to be much easier to work with.

Italian and French meringue requires you to pour hot sugar syrup into the egg whites. While Swiss meringue is made by heating the egg whites and sugar over a double boiler.

If you haven't made meringue buttercream before, I highly suggest you start with this Swiss version. I'll walk you through exactly how to get perfect frosting every time.

Once you've mastered this basic version, try adding chocolate for a luscious chocolate Swiss frosting or strawberry powder for a smooth strawberry frosting.

Why this recipe works:

How to make swiss meringue buttercream

Swiss meringue frosting is so much easier than you may think! It's made by cooking egg whites and sugar over a double boiler, whipping them into a meringue, then adding butter. You can flavor and color the frosting any way you like.

Swiss meringue buttercream frosting only requires three ingredients. These ingredients make up the base of the frosting. Then you can choose your flavoring. Let's go over everything in detail.

To bake this frosting you'll need:

The process of making Swiss buttercream is simple and straight forward. But, you will want to make sure you are following the steps precisely or you risk running into issues with the frosting.

Start by measure out all the ingredients. The process for making the frosting moves quickly and you don't want to be fiddling with measuring things as you go. Prep them before you begin and have them set out at your work station.

The egg whites don't have to be at room temperature since they will be heated. Plus, cold eggs are easier to separate.

Take extra care when separating the yolks from the whites. If a small trace of yolk gets into the whites, they won't whip up properly and you'll need to start over.

The butter must be at room temperature. Not melty but soft enough for you to press a finger into. If the butter has a greasy appearance, it's too soft and will cause the frosting to curdle.

Slice the butter into 1 tablespoon-size pieces and allow it to soften slightly.

I highly recommend using a stand mixer with the metal bowl for this recipe.

Glass bowls retain heat longer. This will increase the amount of time needed to let the meringue cool down.

Also, the amount of mixing required is easier with a stand mixer. If you must use a hand-held electric mixer, make sure it is high powered enough to whip the egg whites into a meringue.

It's also good practice to thoroughly wash and dry the bowl and beaters to ensure they are clean and free of any grease. The smallest trace of oil will prevent the egg whites from whipping up.

Place the egg whites, sugar, and salt in the bowl of a stand mixer and set it over a pot of barely simmering water. The pot should only have about 1-inch of water in it.

Whisk gently but continuously as you heat the mixture. The mixture should reach a temperature of 150°F on an instant-read thermometer.

Carefully dip the tip of a clean finger into the mixture and rub it between your fingers. It shouldn't feel gritty. If it does feel gritty, keep cooking until the sugar is fully dissolved.

Transfer the mixing bowl to the stand mixer and fit the mixer with the whisk attachment.

Turn the mixer to medium speed and beat the mixture until it is the consistency of shaving cream and has cooled slightly. The outside of the bowl should no longer feel warm. If it's too warm, the butter will meld and curdle the frosting.

This is why it is recommended to use a metal bowl. It won't retain heat quite as long as a glass bowl will. I use glass bowls and they take forever to cool down!

One the meringue has cooled some, it's time to add the butter.

Leave the mixer running on medium speed and add the butter, one tablespoon at a time. Don't add the next tablespoon until the previous one is fully mixed in.

As you add more and more butter, the frosting will begin to change in appearance. It can even look curdled. Just keep adding the butter and let it mix. It will come together in the end.

Once all the butter is added, stop and scrape down the sides of the bowl. Turn the speed up to medium-high and whip until the frosting is light and fluffy. This should only take about 30 seconds.

Some recipes call for switching to a paddle attachment when you add the butter. I've found that it's not completely necessary and only dirties up another utensil.

As long as you are not running the mixer on high speed, the whisk attachment is fine to use throughout the entire process.

Add the vanilla or any other flavoring you desire and mix on medium-high speed until it's fully incorporated.

You may also wish to color the frosting at the point. Use oil candy coloring and add only a small amount at a time.

Why won't my meringue whip up?

If your meringue won't whip to stiff peaks, it's possible the egg whites were contaminated with yolk or the bowl and beaters had trace amounts of oil present. Unfortunately, you'll need to scrape this batch and start again.

Why does my swiss meringue buttercream look curdled?

It's common for SMBC to curdle during the process of adding the butter but it usually comes together with a little extra mixing.

Make sure you add the butter 1 tablespoon at a time and only add the butter as fast as it can be absorbed. Once all the butter is added, let the frosting mix and it will come together.

If you followed the steps above and the frosting is still curdled, it's possible the butter was too cold.

Leave the mixer running on medium-high speed and use a hairdryer to heat the outside of the bowl. This will warm the butter just enough to allow it to mix in.

Once it starts coming together, turn the hairdryer off and continue beating until the frosting is light and fluffy.

Why is my swiss meringue buttercream soupy?

Runny SMBC is a result of the ingredients being too warm. Either the meringue was too warm when you added the butter or the butter was too soft.

Remember to let the meringue cool before adding the butter. The outside bottom of the mixing bowl shouldn't feel warm when you touch it.

And the butter shouldn't be so softened that it looks greasy. It should be around 68°F. It will be soft enough to press a finger into but not melty.

If you find yourself with soupy swiss buttercream, don't fret. It's completely salvageable. Just pop the bowl of frosting into the refrigerator for 15-20 minutes. Then continue whipping.

How do I make my swiss meringue buttercream white?

Swiss buttercream will have an off white appearance due to the amount of butter. You can neutralize the yellowish tint by adding the smallest amount of violet food coloring (affiliate link)*.

Dip a toothpick into the coloring then dab only a pinpoint amount into the buttercream. Whip the frosting and the yellow tint will fade away.

How do you dye swiss meringue buttercream?

I've found that oil candy color (affiliate link)* works best for tinting meringue buttercream. Work with 2-3 drops at a time and mix it in once all the butter has been added.

If you only have access to gel food coloring (affiliate link)*, you'll want to tint the meringue before you add the butter. Otherwise, you risk having specks of color throughout the frosting.

How do I make my swiss meringue buttercream a different flavor?

Once you've added all the butter and whipped the frosting until it is light and fluffy, you can add any flavoring or extracts you like. Here are a few of my favorite.

How to store swiss meringue buttercream

You can store the frosting in an airtight container for up to 1 day before you plan to use it. Allow it to come to room temperature then re-whip before using.

The frosting can also be frozen for up to 2 months. Thaw it in the refrigerator overnight then let it come to room temperature and re-whip before using.

Cakes or cupcakes frosted with SMBC can be left out at room temperature in an airtight container for 2-3 days. Or store them in the refrigerator for up to 1 week.

The recipe makes enough to frost 24 cupcakes or a two-layer 9-inch cake.

Can I double this or should I make two batches? I have the 6qt kitchenaid mixer

I made this recipe; love it! I would like it to have more flavor and a little sweeter. Would it work to add an extra 1/2 cup sugar?

I don't recommend adding additional sugar as this can affect the integrity of the meringue. And the less sweet, buttery taste is the nature of Swiss meringue frosting. If you prefer a sweeter frosting, try my American buttercream instead.

I've seen some recipes where the bowl is actually touching the hot water in the double boiler - does it matter? Also, I tried adding coloring gel (before seeing this post) to my SMBC and it tasted very chemical-y. Has this ever happened to you?

The bowl should never touch the water when using a double boiler. That defeats the purpose which is to slowly warm the mixture without overheating it. Use only about 1 inch of water in the pot to prevent it from touching. Any food coloring can taste chemically especially if you have to use a lot. I prefer the oil candy color that I linked to in the post because it doesn't take as much to achieve the desired look.

This is the best frosting! I've been trying different buttercream recipes, and they always seemed too heavy or too sweet. It was not difficult at all. Thank you for the recipe!

Made this today. I have used other recipes and ended up throwing out a lot of ingredients. I love the way the method is explained here so I could troubleshoot right away when something wasn’t right. Well done! I was just about to give up on SMBC, no more! This is now my go to. THANK YOU!